Nelson Gay has been quarantine-approved by the Barbados Government. Please click here to see the Barbados Covid-19 Regulations

The history of Nelson Gay – a remarkable provenance

Nelson Gay was the vision of US Ambassador Robert M. Scotten, who spent many years travelling abroad with his wife while serving as US Ambassador to The Dominican Republic, Costa Rica, New Zealand and Ecuador, from 1940 – 1955. The Scottens were close personal friends of President F. D. Roosevelt, and were renowned for their lavish parties, many of which were later held at Nelson Gay.

When the Scottens came to Barbados in the early 50s, they instantly fell in love with the culture and people, and were entranced with the natural beauty of the Island. They often visited the house of Claudette Colbert, a French-born American multi-award-winning world-famous actress best known for her Oscar-winning performance in It Happened One Night, with Clark Gable. There, the Scottens mingled with illustrious guests such as Frank Sinatra and his wife, Mia Farrow, who spent their Honeymoon in Colbert’s guest cottage, and President Reagan, who was a close friend of Colbert. 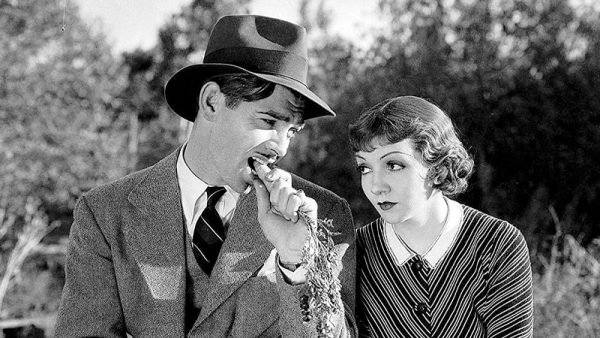 Claudette Colbert with Clark Gable in It Happened One Night, 1934. 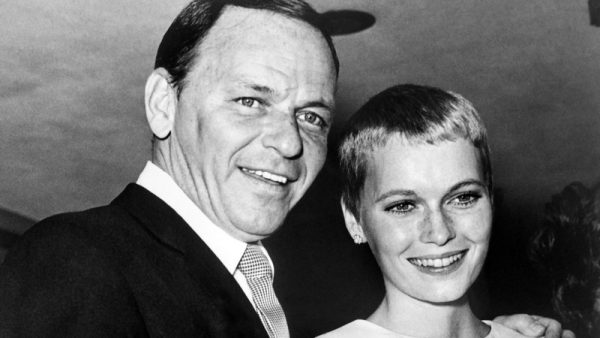 Frank Sinatra and Mia Farrow on their Honeymoon in Barbados, 1966.

Colbert lived in an idyllic spot near Speightstown, on a half-mile crescent beach, with an empty plot next door. The Scottens saw a wonderful opportunity and purchased this lush, oceanfront land on what they considered to be the best beach in Barbados.

The Scottens hired British Architect Barbara Hill, a member of the UK Royal College of Architects, to realise their dream of an idyllic, Palladian home on the oceanfront, where they could entertain distinguished guests and friends, and throw their famed extravagant parties. Nelson Gay is considered to be her finest work, and by many to be one of Barbados’ finest and most elegant homes, retaining the charm of a bygone era. The house was built in the late 1950s, using native coral stone in the grand Palladian style with 14-foot-high ceilings. The land chosen by the Scottens was perfect for a house like Nelson Gay; lush, tropical gardens surrounded the home, and the pristine, half-mile of Cobblers Cove beach was right on their doorstep. One afternoon, while on an official US Government visit to Barbados, President Reagan came to lunch with Claudette Colbert, and could not resist an afternoon dip in the Ocean, just beyond Nelson Gay’s garden gates. 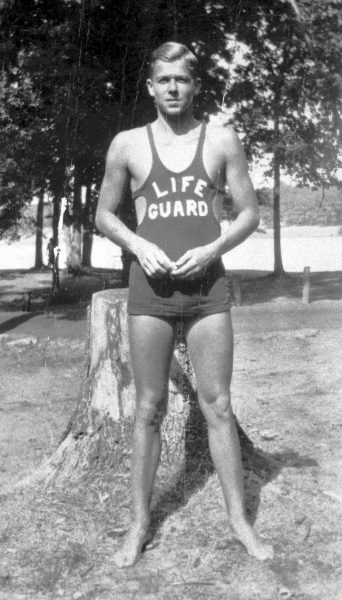 President Reagan in his bathing suit. 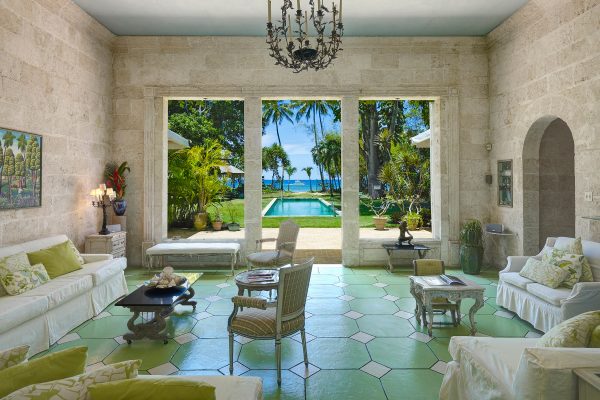 The living room at Nelson Gay, with an uninterrupted view of the Ocean. 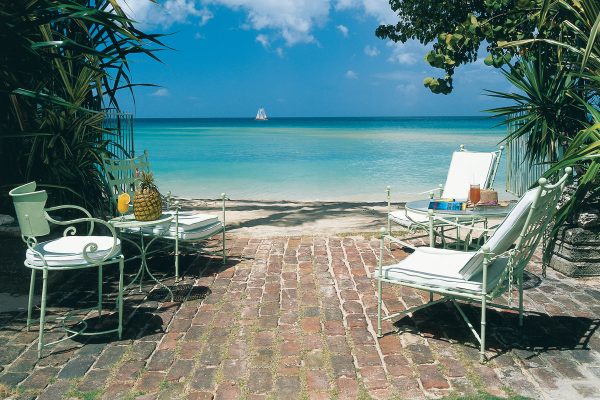 The beach at the steps of Nelson Gay, boasting crystal-clear waters, perfect for swimming.

Eventually, the Scottens sold Nelson Gay to Eric Estorick, an American art collector and author. His gallery in London, The Grosvenor Gallery, still operates today. One summer, Estorick travelled to Paris to meet Erté, who was at that point retired. Erté was a fashion designer and artist known for designing over 200 covers for Harper’s Bazaar Magazine in the 1920s and 30s. He was also renowned for his elegant fashion designs which captured the style of the 20s, as well as his costume and set designs for many classic silent films. Estorick staged an Art Deco Exhibition featuring Erté’s work, which was a roaring success. Erté and Estorick became good friends.

After Estorick’s exhibition of Erté’s work, he attracted legions of new admirers and collectors around the world. Perhaps his best-known image is Symphony in Black. This influential image has been reproduced and copied countless times. 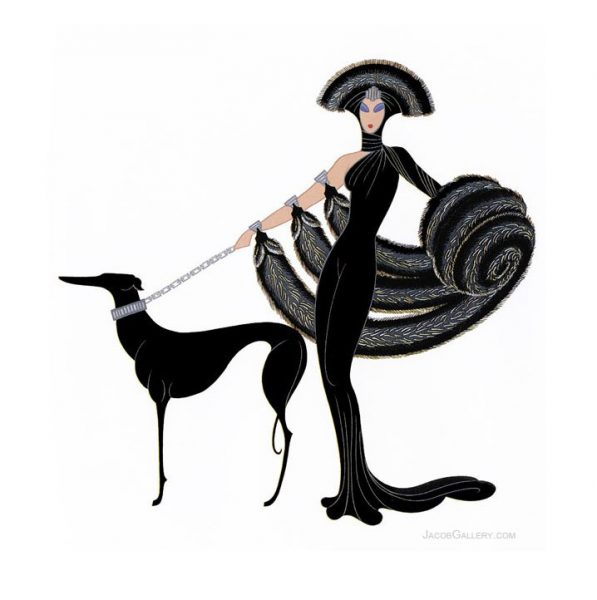 Erté visited Nelson Gay numerous times, staying in what the owner now calls the Erté Bedroom. As a gesture of gratitude and friendship, Erté painted a black mermaid on the bedroom wall, which remains there to this day. 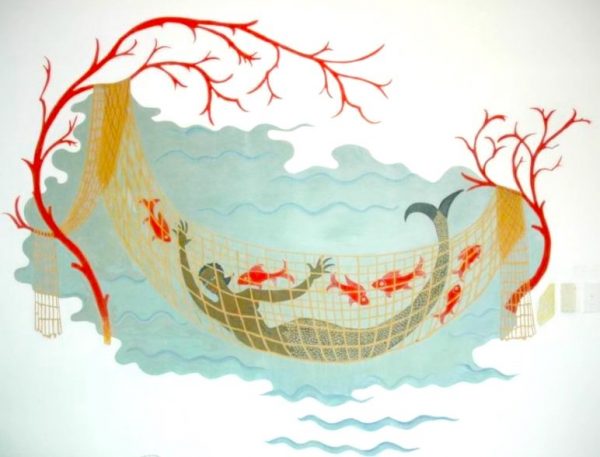 Erté mural in the so-called Erté Bedroom at Nelson Gay.

The glamorous parties continued at Nelson Gay, until Estorick’s death in 1993. Nelson Gay was then acquired by a successful European industrialist, who at the time was one of the richest people in the world. A conscious effort was made by him and his family to keep Nelson Gay exactly as the Scottens and Barbara Hill had designed it, with the textured, painted cement floors and the dining room furniture designed by Oliver Messel, one of the foremost stage designers of the 20th century. Messel was the Uncle of Anthony Armstrong Jones – husband of Princess Margaret, and was very much in demand, designing multiple homes in both Mustique and Barbados.

Today, Nelson Gay is still owned by an extended family member of the industrialist. All the original features have been retained and carefully maintained. Every effort has been made by the current owner to keep Nelson Gay true to the original vision while sympathetically adding the amenities expected today. The guest book bears testimony to the magic of this fine colonial residence. It has no equal on the island for timeless good taste on the sheltered west coast.

Douglas Urbanski, Oscar-winning Hollywood producer of “The Darkest Hour”, was a guest at Nelson Gay in more recent years (2016), and “immediately fell in love”. After his stay, he wrote to the owner: “It was love at first sight…Nelson Gay is representative of the very, very best of Barbados tradition. It’s a beautiful old house, kept going, without any of the so-called ‘modernizations’ – the beautiful old bathrooms, the scent of the coral stone and tropical gardens; all of it weaves a magical spell.” 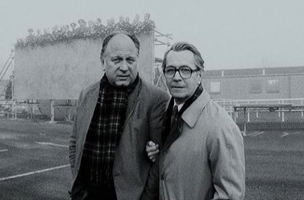 “It has become customary for me to go each winter to that paradise on earth, Barbados, to stay at Nelson Gay… I awaken each morning to the song of turtle doves, and each evening I fall asleep to the serenade of tiny frogs.”